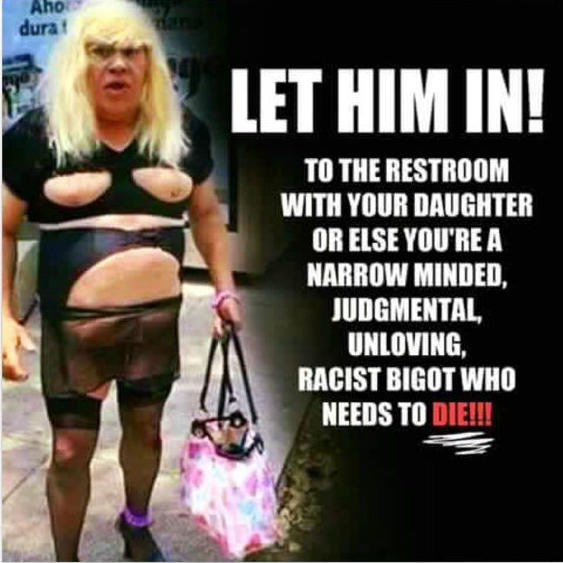 Well, that's funny, but not an answer to my questions...

You are indeed a judgmental, unloving, racist bigot, but don't deserve to die for that (projection much?) and it's not because of fucked up folks like that image!!

Abraham, you are not able to comprehend what you read: the screed in the image is from the Leftist perspective. It's about legalizing sexually confused, spectrum sexuals, and anyone else to enter into girls' private spaces. You can spend a lot of sputum in your Ad Hominem denials, and it makes no difference. You are wrong, categorically and your opinion means nothing in light of the obvious facts.

Skit, I answered your issue before: it's not about trans-whatevers. It's about opening the private space of girls and women to anyone who wants in. No one can be proven NOT to be "female in my mind" despite the testicles dangling below the penis. Therefore, anyone is allowed in the girls' spaces. Prove otherwise, if you wish. Prove that the guy in the image is not "female in his mind", despite his maleness.

It is in fact about opening private space of girls and women to anyone who wants in. Yes, I am asking about that. And the questions are: what happened exactly? Did rapes go up? Were people molested more? Were women terrorised by males pretending to be female? (LIKE THE PICTURE YOU POSTED) Who suffered because if that? Who was forced to do something incredibly wrong? Do you have any specific examples (LIKE THE PICTURE YOU POSTED) and stats on how such incidents happen more today than before?

Again, why do you care so much about that fringe topic? and that's why I am asking what's the big deal here? Are there any evidence that transgender folks are committing crimes or not? I honestly don't know! It seems to be some overblown issue where there is no issue really. That's my point. So I ask again Stan... why do you care so much? Can you or can you not answer my questions above?

I have no statistics. It is plainly and clearly a hazard, and if you cannot see that it is such, so be it - you claim that it is trivial, yet even more than Title IX, it affects all female private spaces. Regardless of whatever you intend to prove with your demands, you cannot deny the potential hazard without violating common sense.

So make it clear what you want here, other than to ask the same question over and over and over. You must have a purpose, or maybe you don't, in reality. If you actually wanted data, you surely must know how to access google/bing/duckduckgo etc. So it's not data that you actually want. You want to prove something, so just do it. Vindicate yourself with your claim of some sort of victory lap.

And then tell us why it is alright for a male to win the state record in female competition(s). And explain why you are so concerned about such a fringe issue yourself.

No, I don't think it's alright for a make to win the state record in female competition, and no I am ~not~ concerned about these issues. That is my only point. I am puzzled by the amount of attention ~you~ give to this silly thing, just like I find the SJWs silly to work so hard for these things when transgender people are a tiny minority that is virtually invisible once their transformation is complete.

You are being triggered by these excessive move by the Left because the Right-wing alternative media you read and watch make it worse than it is. No wonder you cannot quote any stats...

Finally who cares what I believe? I am not trying to convince you of anything here, I don't have any point to make really. Again, I am just asking why you put so much emphasis on things that really don't matter that much, and it's fascinating that you end up doing the same as far Left blogs during that process.

No stats. Just common sense. Got it. You have nothing to offer but feelings.

Abraham is banned from this blog.

Skit: "No, I don't think it's alright for a make to win the state record in female competition, and no I am ~not~ concerned about these issues. That is my only point."

Skit, here's my point regarding your point: I don't care what you think. If you are not concerned, then go look at cat videos... or wherever the denialists of Leftist Hegelian antithesis go. I sometimes think that we should just allow the Left to take the nation clear into the abyss, as in Lenin-world, Mao-universe, Pol Pot-cauldron, and Che-inferno.

I'd guess that the establishment Left's (including the Deep State, MSM, Hollywood, most of "Education") creation of the generation with no memory of it's history or the history of free, independent, humans, v.s. the history of Leftist encroachment followed by seizure and eradication by genocide of those who demurred - also doesn't bother you, either.

Even recent "social justice" histories, such as Rotherham Child Rapes, don't bother the Leftist, but white males, of course, do - and at the top of the national political party of the Left in the USA. But, nothing to be concerned about, of course.

As for what sources I read, you have no idea. So your accusation is both self-serving and incorrect. Apparently you have not read enough here to see how often reference is made to WaPo, HuffPo, NYT, and to Leftist blogs. Your are partially right in that much of the actual news is ignored/suppressed/modified by the Left, and one must seek out reliable alternative sources.

However, your accusation that I am an unthinking product of false news is unfounded and without any evidence to the contrary. You are taking the "moral attack" route, wherein you present no contrary evidence, you merely attack on your principle of "triviality", and you ignore the probable long term consequence of that which you declare "trivial".

And rather than merely disagree, you have chosen to create "classes" into which you place me, so you can address my identity as you choose to define me. You define me as crying "victim", when in fact I am watching and recording the progress toward a revolution. The "trivialities" of the Left have been adding up ever since the late 1950s to early 1960s. But the totalitarian tendencies of the Left have always been the same and not trivial: slaveholders and KKK; creators and enforcers of Jim Crow segregation and KKK; fight against civil rights; keepers of the Leftist ghetto plantations; now its the Antifa version of the KKK. The Left should never be considered trivial, if you know and realize its actual, real, history.

They lost one extremely bloody war in 1865 - their war to keep blacks in slavery. Republicans won, and slaves were freed.

They will lose this upcoming war as well.

Thanks for conforming that I am indeed correct in my assessment! You assume I agree with the Left because I asked you questions, and pretty much everything you wrote is identity politics. That's exactly what Leftists SJWs do. And you decided to focus on that extra paragraph I purposely wrote to test you, to see whehter you would get distracted, which is what happened. You took the bait because you aren't able to focus on issues one by one. You have to lump everything together, again just like SJWs.

The western world has been balkanized intellectually and politically into identity enclaves by the Left. Whether you recognize that or not, it has happened. And if you deny it, then you are a Useful Idiot (historical term for one who pretends there is nothing wrong). The Left has created the Class System in the west, based on the Hegelian/Marxist three class system for "progress" toward Leftist hegemonic and totalitarian utopia. In other words, exactly what was installed in Russia by Lenin, and China by Mao. The same exact philosophy applies to the American and western Left.

My assignment by the Left is to the "Deplorables"; White, male, gun-owner, fly-over, anti-Atheist, Anti-Leftist, to be eliminated. I didn't choose that.

To repeat, what you think of all that is of no concern to me. Deny the existence of Class War all you want; that has no effect on reality. You might try reading what the Left actually says.

You're completely right here, regarding the far Left, but telling just half the story. The other half is that your side is doing the same, you are doing identity politics, from the far Right. It's the main approach of your blog.

So what? Make a point for crying out loud. Yes, there is a difference between law-abiding and lawlessness, between integrity and sleaze, between honesty and dishonesty. Again, so what? Are you unable to perceive the difference? Yes they are classes, demarking truth vs. falseness, liberty and freedom vs. totalitarianism, and so what?

Really. So what? Make a point. There is a class war going on, and a "Cold Culture Class War" being executed legally at the top levels of the most powerful nation on Earth (for the time being). Are you not aware? You are concerned that the Constitutionalists are committing Class War against the poor Left? Really??

Why are you so emotional about this? You voted for the people in office today. You're free to can choose what to watch, read, do, discuss, etc... Yet, you choose to discusd people's genitalia. Why? That's my point, why do you care about such specific topics with no proven consequences whatsoever?

Adios, troll. If you come up with something of actual value to contribute, you'll need to change your name again, 'cause skit won't work.