It is not uncommon for a Leftist (Atheist by definition) to deny the existence of objective morality and yet still claim the moral high ground and moral superiority to ancient moral codes which have been in place for millennia (the exception being Islam, which can do no wrong). The AtheoLefist moral code is purely pragmatism and personal proclivity which is put in place at the convenience of the individual.

Not only can the individual's moral code change at a moment's notice, it can also change based solely upon the person being addressed. This has been made nakedly obvious with the advent of the successful revolution of the Deplorables in the elections of 2016. It seems impossible not to observe daily the hatred and foulness of the language of the AtheoLeft, yet accompanied by the attendant moral hyperventilation of a self-evident presupposition of moral authority vested totally in AtheoLeftism.

Leftism is thus a fundamentalist religion. It incorporates personal moral authority to make moral judgment in the social Darwinists who must, morally of course, drive humanity in the perpetual progress toward values-free, total equalitarian, hive-think and top-down social/political/economic control of the New Man. In other words, progress toward communist utopia.

The 20th Century communist utopias which actually came forcefully to fruition are ignored due to their mass-murders, genocides, population control through internal purges, failures to feed populations which starved, political prisons, political assassinations and other discomfiting facts which always accompany dictatorships. Communism, say the professors, has never been really tried.

The current AtheoLeft is true to superficial equalities, those of skin color (but not cis-white), sex/gender (but not cis-male), sexual preference (but not cis-hetero-), and NOT equalities of thought, moralities, or first principles. BadThink is punished, and the new KKK quasi-terrorist arm of the AtheoLeft is the black-masked Antifa enforcer band of political thought thugs. The analogy to the KKK is astonishing, right down to the masked, anonymous, burning and destruction, and attempts to instill fear through violence. It's all in service to the bigotry of denying the validity and rights of those who they hate. For the AtheoLeft, such violence and hatred is moral, even morally required, in order to preserve the march of progress toward the communist dictatorships of utopia.

Each communist experiment of the recent historical past had its equivalent of the KKK/Antifa. Whether they were KKK, Brown Shirts, Red Army, Cultural Revolutionaries, Shining Path, Sandinistas, or just communist mountain guerrilla rebels, they are all the same: genocidal killers in pursuit of utopia, which they will control. Some have even been elected, only to ultimately set the troops on the now starving electorate. In their essence, they all are the same: morally endowed to enforce utopia, even with the blood of the populace.

The AtheoLeft is the fundamentalist religion of utopia through violence and conquest.

Purported Antifa Pamphlet, purging the white race by eradicating the white children in a necessary eugenic genocide, to enable utopia: 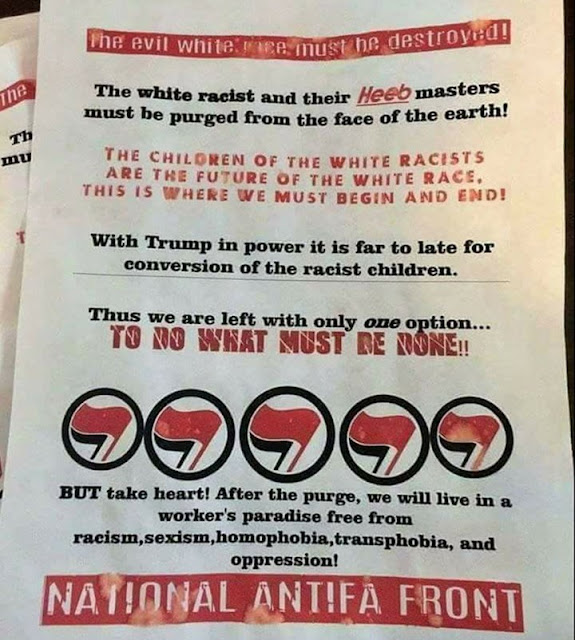 Who knows where that sheet came from? Could be a false flag for all we know.

It reads so much like an Onion piece, I just have to suspect it.