They're ALL "one of theirs" 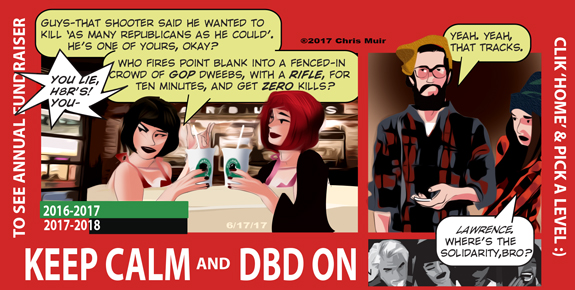 Which is why there is a very sudden call for civility. Right in the midst of all of the calls for killing Trump, as in the now-disappeared article in HuffPo for capital punishment of Trump and his half of the population; the nightly killing of Trump on Broadway, NYC; the infamous beheading "joke"; on and on. The rhetoric is no joke. It demonstrates the Left's end game, revealed by the cognitive dissonance of losing to the Destroyer of Leftist Hegemony.

The rational Left has demonstrated that their moral authority is the "Lord of the Flies". And that "civility" is a concept of pure convenience, not a fundamental Leftist principle. It's how they deflect the obvious blame they so richly deserve by pretending to abjure that which they joyfully created with their 6 month hate rant.

Leftist morality can and does turn on a dime; it is purely an act of convenience, under Consequentialism.