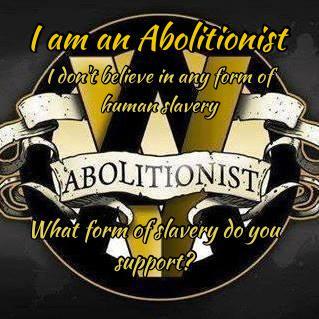 The contrary of the Democrat Narrative is abolition. Abolition is the direct cause of Civil War, as the Democrats refused to give up slavery as the abolitionist Republicans demanded. The slavery was extended by Democrats after the Civil War as they instituted Jim Crow laws to suppress the blacks. Abolition, again by the Republicans, created the 1964 Civil Rights Act which outlawed Jim Crow and other Democrat atrocities against the blacks. The Democrats, under Lyndon Baines Johnson, created the welfare plantations which captured entire communities of blacks in dependency upon the federal government and the Democrats in particular.

Under the LBJ Democrat plantation model, the oppressive Left was enabled to scream "racism" if the abolitionists attempted to place welfare into the oppressive context it deserves, and to free blacks from their dependency. Thus blacks were induced to falsely attribute racial suppression to the abolitionists, due to the lies of their actual oppressor class, the Left. Blacks who are unable to see this are still functionally the slaves of the oppressive Democrat Leftists who have not changed even a whit since their original party incorporation specifically intended to enslave blacks.

Some blacks have escape the Leftist Democrat enslavement. Many of these still believe that the oppressors are the Republican abolitionists, and others are able to see the truth regarding the Democrat enslavement which still exists after nearly 200 years of blatant oppression.

This Leftist and Democrat lie is supported by the invective which is the entire output of Democrats. The Marxist class war has supplanted democratic and federalist theory with Victimhood and Oppression Classes, which the Leftocrats flail constantly, in order to preserve the cultural schism which Marxism creates and exploits. Without that schism which they create and nurture, the culture would solidify and the leftocrats would have no policies at all.


On Intimidation and Character Assassination

At some point in the history of this country, the gatekeepers in media and entertainment presumed that they were the true rulers of this country, that they determined what people believed, what they thought, and what they were allowed to say. They presumed to move Presidents and Congressmen merely by leveraging character assassination and establishing the framework of their accepted Overton Window. They could swing whole elections.

The Internet has deprived them of the exclusivity of this framing. People may (and frequently do) bypass them for news and information. But they still retain the power of character assassination, even if a few, like Donald Trump, have remained stubbornly immune to it. They have the funding, the airtime, the audience, and allies among gatekeepers and HR departments around the world.

It is that power which must be broken if we are to step out into the light again. It is not enough that we cast them as fake news, though this must be done also. They cannot be permitted to assassinate characters on a whim.

And if we cannot break them of this power, then we must deploy a similar power ourselves. How much economic damage can we force on them if they do this? How many people can we get fired? How many businesses can we destroy?

Email ThisBlogThis!Share to TwitterShare to FacebookShare to Pinterest
Labels: Abolition vs Leftist Oppression and Suppression