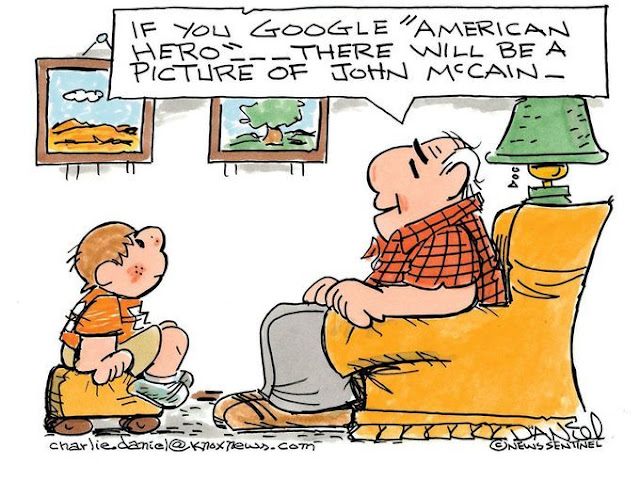 If you know anything at all about John McCain and his stay with the North Vietnamese, you are aware that he was a massive traitor, betraying all his knowledge about military positions and strategy; also he was the equivalent of Tokyo Rose, being the inter-prison-camp loudspeaker announcer for demoralizing the American POWs in all the prison camps. You are also aware that he scuttled certain attempts to find MIAs.

John McCain has always been a traitorous scumbag.

It is no wonder that the Left iconizes McCain. Even Trump was bullied into claiming - after first denouncing McCain - that McCain was a hero.

Now he has betrayed the Republican Party with insane attacks on Trump, while traveling the world. Maybe he has always had a brain tumor. There's not much else to explain his "issues".

UPDATE:
This Prof has rattle the chains of the Left with this FB post:

I find myself annoyed at the groundswell of good wishes for John McCain after his diagnosis of glioblastoma and have been thinking through why. A great line from Arendt's Eichmann in Jerusalem comes to mind regarding the valuing of elite lives over ordinary lives:
"There are more than a few people, especially among the cultural elite, who still publicly regret the fact that Germany sent Einstein packing, without realizing that it was a much greater crime to kill little Hans Cohn from around the corner, even though he was no genius."

This analogy should not be interpreted too strictly. McCain is certainly no Einstein and I don't mean just on brains. Einstein had very appealing humanist instincts, as a socialist, antiwar, anti-imperialist, and anti-statist Zionist. McCain is a war criminal and, more to the point. someone who as a politician has championed horrifying actions and been lousy on state commitment to public health. So dying or not, he's a risible public figure (I have no idea what he is like on the personal level and don't care).

But ultimately what troubles me is the urge to send such well wishes to an utter stranger as it reinforces the notion that some lives are more important than others. There are lots of people with glioblastoma and who have died from it (including my mother twenty years ago). I would much rather read random good wishes to contemporary little Hans Cohns than to politicians.

Read this for the snits:


Professor ‘annoyed at the groundswell of good wishes for John McCain,’ calls him ‘war criminal’