Definitely NOT B. Hussein Obama 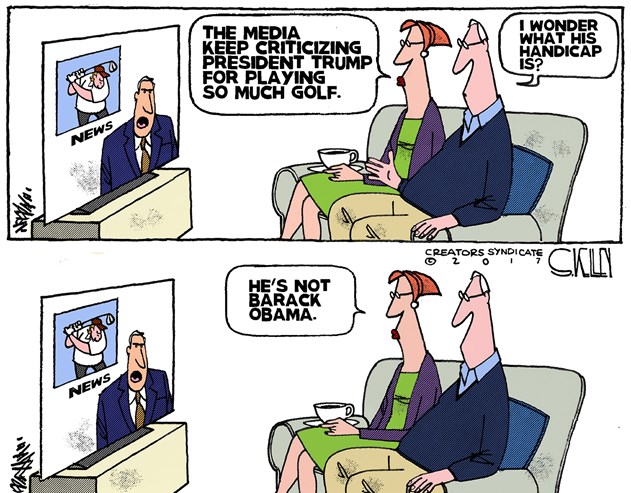 He made it an issue by criticising golf and promising that he wouldn't have time to. And it's not just that he plays golf much more than other presidents, it's the cost and his ownership of the golf course. It's a bad look and people hate having hypocrisy rubbed in their faces. It's really given ammo to the other side.

Obama golfed while hurricane tides drowned people. Bad look? Hypocrisy? If that's all the ammo the other side has, then they have nothing.

Stan, it's like you're in a cult and Trump is your leader. Seriously can't you see anything wrong with him!?

Har! If golfing is all you've got against Trump, then you have nothing.

Of course Trump has flaws. But he was hired specifically because of his bull dozer aggression, as far as I'm concerned. The Left thought they had a strangle-hold on the Deplorables, and they planned to strangle us.

We Deplorables were actually given no choice, because all the other "Republicans" were beholden to their billionaire benefactors, AND they are otherwise wimps, cowards and RINOs. Was George Patton flawed? Sure, and he was necessary for progress in the war against licentious, evil to the bone, totalitarian enemies of freedom. So is Trump. Flaws? Who cares? I don't, because it's war, and either freedom lives or will be smashed by the politically correct fascisti of the Left.

But I've said all this before.