Potential hominin affinities of Graecopithecus from the Late Miocene of Europe

Therefore, we submit that the dental root attributes of Graecopithecus suggest hominin affinities, such that its hominin status cannot be excluded. If this status is confirmed by additional fossil evidence, Graecopithecus would be the oldest known hominin and the oldest known crown hominine, as the evidence for the gorillin status of Chororapithecus is much weaker than the hominin status of Graecopithecus [8]. More fossils are needed but at this point it seems likely that the Eastern Mediterranean needs to be considered as just as likely a place of hominine diversification and hominin origins as tropical Africa.

Or, as interpreted by the Telegraph:

Europe was the birthplace of mankind, not Africa, scientists find 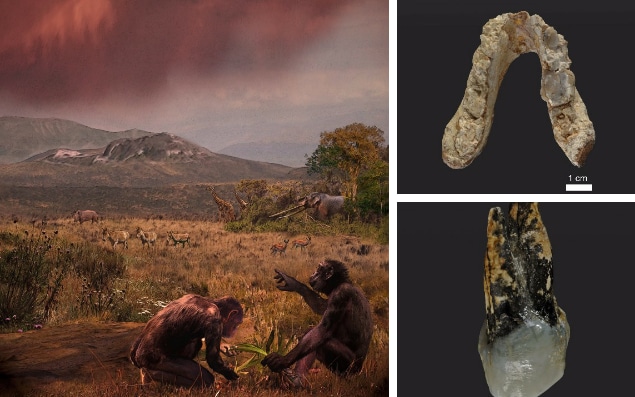 The DNA guys won't be happy with this. Remember how they told us that all humans genetically trace back to a single woman somewhere around West Africa? And remember how all of us have African genes, not to mention a substantial dose of Neanderthal in all of us? Sorry guys. That's all in the dumper.

Now there's two jawbones and some teeth. That's what it is, and it's all that it is. And the paper-writers claim that it places the source of humans squarely in Greece. If you swallow the extrapolations that always accompany such a find, that is the all-new evidence for the "birthplace" of humans. The jawbones are not human, mind you. It's from some other creature which is homind-ish, or pre-human-ish, or at least had jaws and some teeth. Keep in mind what the actual evidence really is. Everything else is extrapolation and speculation.

You probably thought the issue was settled that humans are nearly identical to chimpanzees. Well, it was settled and frequently cited as fact, until the actual full-genome reading was done which showed that humans did not come from chimps, nor from gorillas, nor from orangutans. Probably didn't read about that, did you? That news doesn't help with any materialist narrative. Well, go HERE for details. There always is this indeterminate lineage which is the "common ancestor" - no evidence for it, but it has to be there because that's how they draw the charts, and it's what the charts show.

But if this jaw/tooth combo are the "real" ancestor of humans, then where do the Chimps, Gorillas and Orangutans fit in? Seems like they are forgotten in this new, improved, eurocentric sourcing of humans.

Email ThisBlogThis!Share to TwitterShare to FacebookShare to Pinterest
Labels: paleontology