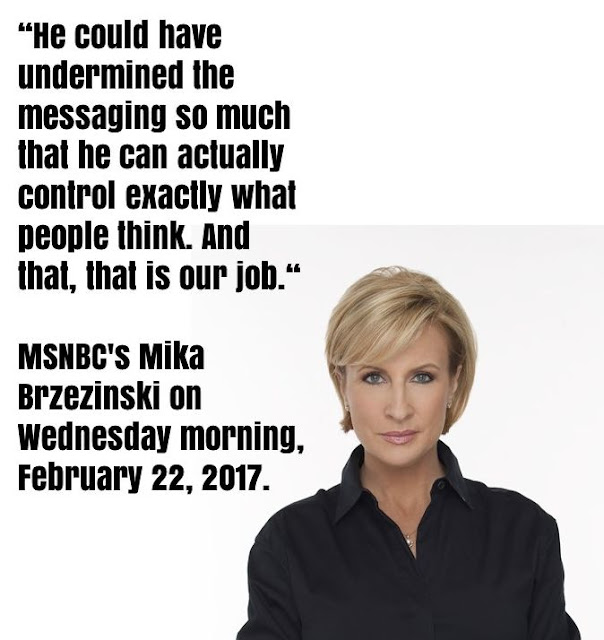 Email ThisBlogThis!Share to TwitterShare to FacebookShare to Pinterest
Labels: Leftism and its Principles

I took a look at the entire conversation they were having, and I believe she was trying to say that the media's job was to keep Mister Trump from altering the messaging and controlling what people think. I think she did a lousy job of it and should get the marbles out of her mouth (and her brain).

Now, whether this is what she intended or not, I have three things to say:

1) This appears to be a classic case of projection, since it has long been understood by nearly everyone that the job of the newspapers, television and movies was to shape the opinion - ie; the buying habits - of the average American consumer. Excuse me, citizen. They're pretty good at it. They're accusing Trump of attempting something that has been the focal point of their industry for at least a hundred years. Professional jealousy?

2) Perfect control over what people think is simply impossible, both because 'people' are all different on an individual scale, and because the speaker him or herself is flawed. The woman speaks in hyperbole, if we are to assume she is speaking any sort of truth at all. To imagine you have somehow accomplished perfect delivery and 100% effect with a presumably corrupt message sent by a presumably corrupt *anyone* to a presumably corrupt audience is to live in la-la land, because the pairing of the two - perfection and imperfection - effectively cancels each other out. They are mutually exclusive. Even in a fantasy world.

3) Despite the appearance of possible out-of-context quote mining, the reading I took away from the transcript was that the woman simply committed a Freudian slip. I think deep down, she *does* believe it her job to tell us what to think, what to believe. She works for MSNBC, and if anyone in the Media could be described as hard Left, it would be they. You will be hard-pressed to find a more self-indulgent bunch of self-appointed intellectually and morally superior ninnies. They're all living in a power fantasy, and have been for a long time.

In recent years, especially in the run-up to the election of 2016, a number of the more dedicated Leftists at the UN allowed their masks to drop. Apparently the fix was in, and it no longer mattered if the rubes knew they were being suckered. In fact, it was more satisfying to gore us with the blunt-edged AGW knife, *because* we knew it was a lie intended to redistribute our wealth. What mattered was the feeding of egos - Leftist egos, of course - and the AGW lies and the resulting taxation, etc, only satisfied *because* it was against our will, and regardless of what we knew to be true.

Did this woman do the same - let the mask drop a bit - because she thought the fix was in and it didn't matter what her audience thought? Or was she lulled by being surrounded by fellow Leftists into dropping her guard? Or was this a very badly-phrased comment taken out of context by people looking for signs of corruption and willing to believe the worst?

What I DO know is that Stan owes us something fresh now. Five months ago!
It's better than a year ago, but this one is already beginning to turn from age! C'mon, Stan. I liked the cartoon with Elmo. Keep it up!