Icon of SJW Ignorance: Sarah Bond, a professor at the University of Iowa

She says that, at one time these statues all had paint on them-- they had polychromy. Now that the paint has peeled off, we see them as only white, while the actual figures they depict were probably more Mediterranean in complexion.

The wall paintings which were preserved at Pompeii show clearly enough that the icons of the culture were white. What the rest of the culture might have been, Sarah cannot know and cannot claim to have the truth without practicing deception. She obviously thinks that western culture, apparently her declared forte', is without any merit with respect to other cultures, and her attitude is not concealed in the video. So she is a white "intellectual", or at least an academic, who denies the value and roots of her own culture.

For more paintings with respect to Roman-era pigmentation, try a search on "wall paintings of Pompeii", and beware of the pornography.

Rome did, in fact, collect many foreigners from a great many places. That does not mean that Romans were mongrels, and the massive evidence shows otherwise.

Pompeii: Fresco from the Villa of the Mysteries. Pompeii, 80 BC 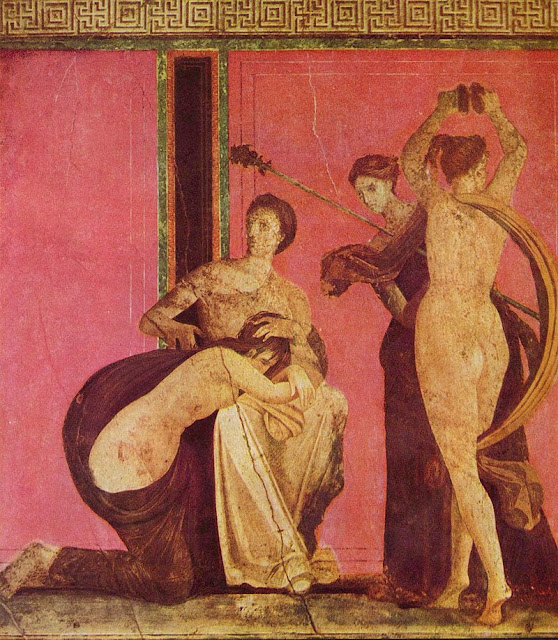 Many of the sexual frescoes depict a very white woman with a very tanned man. This proves nothing, but suggests that women stayed indoors more than the men.

Email ThisBlogThis!Share to TwitterShare to FacebookShare to Pinterest
Labels: SJWs and anti-white