Trump Cracks Me Up

Whatever he does, he does in a way that makes the Left apoplectic - purple faced. I wonder if there is data somewhere on Leftist strokes related to Trump tweets...


Transgender Navy SEAL slams Trump for banning servicemembers: 'Let's meet face to face and you tell me I'm not worthy'

Here's what negates the CNN headline as being deceptive:


She came out as transgender after leaving the military in 2011

Well of course that's how it happened. As a Seal, he was male, still had his male parts, hormones and beard: 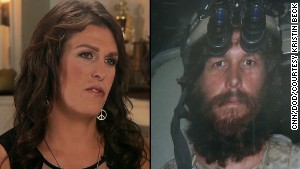 IN OTHER WORDS, he was not a "trans" at the time, except in his mind, maybe.


If he continues to do this to people -- you know, I'm a human being. I deserve dignity and respect. I'm an American. I deserve freedom, and a life of happiness and liberty. And if you, as the President, continue down this road of stripping and dismantling freedom -- you know, he's doing this through so many other ways, he's doing it on immigration, too -- then, "You're fired." And we do that through the polls. And we do that through grass-roots lobbying. We're going to make a lot of noise.

That's not how the concept works, M. Beck. Dignity is something you might or might not display as part of your own personhood; respect is what you earn. And you earned respect as a male combat Seal. But you don't get respect just because you are a human. There are plenty o'humans who do not deserve the slightest amount of respect.

As for deserving freedom, yes, respectable humans deserve freedom, but not guaranteed outcomes, so don't project that as a human right. Happiness? Nope, happiness is not guaranteed for anyone, ever. Not everyone can be considered for the job of astronaut, no matter how unhappy that might make them. Liberty? Everyone is at liberty to apply for a job as astronaut; acceptance, though is not a human right and you are not at liberty to just show up and get on a rocket.

This entire narrative represents the LOGIC FAILURE called "equalitarianism". People are NOT equal in many ways that are very important, including the capability of being a Navy Seal. People without any male components are very unlikely to be able to qualify as Seals, and if they are let in anyway, they will degrade the entire enterprise. It's obvious, unless you actually believe in selfish equalitarian principles, which serve purposes other than those of the organization you propose to enter.


IF: penis and testicles, THEN: male;

IF: no penis and testicles, THEN: NOT male.

IF: no claim of sexual confusion, THEN: fine; serve as male or not male.

IF: claim of sexual confusion, THEN: get a different job, outside the military. (Planned Parenthood has jobs teaching pre-schoolers how to be confused about their sexuality, which three year olds don't even know that they have).

Try the French Foreign Legion (does it still exist?) or join the CIA, or join McCain's political staff - see how he treats you.

As for Trump using tweets, let's see: Roosevelt used the new technology (radio) to talk directly to the populace; Eisenhower used TV; Trump uses the internet. It's not the technology, of course, it's pretty much Trump-Derangement-Syndrome. We'll find out the details in due time, but now is the time for Leftists to display their pants-crapping moral superiority, aka equalitarianism.

Email ThisBlogThis!Share to TwitterShare to FacebookShare to Pinterest
Labels: Transgender, Transgenders in the Military

Hey Stan, how's it going? Haven't posted on here in a while. You are right about something you said: Not all humans deserve respect.

Since I haven't posted here in a while, I wanted to share an article that Don McIntosh wrote about Evolution (check the comments as well):